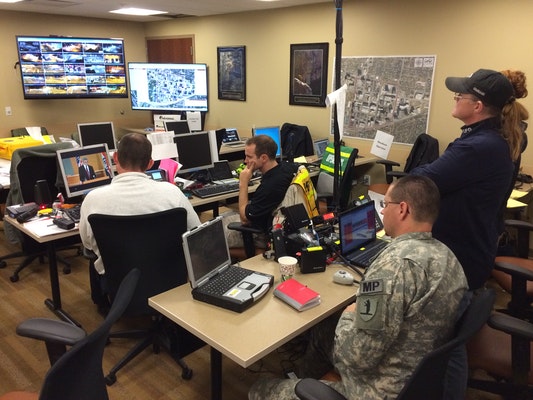 CLAYTON, MO – An incident management tool produced by Incident Response Technologies, Inc. (IRT), allowed the city of Clayton, Missouri to prepare for and respond to demonstrations, protests and incidents surrounding the grand jury announcement of the Ferguson case. As Clayton is the seat of St. Louis County, the announcement was made from the County’s justice center, making Clayton an anticipated location for demonstrations organized by various groups.

The Rhodium® Incident Management Suite, a cloud-based software, was utilized by the Clayton Fire and Police Departments to coordinate with roughly 60 other agencies in St. Louis County including those responsible for the protection and management of critical infrastructure such as local law enforcement and the Missouri National Guard. Given the possibility of widespread, on-going demonstrations following the grand jury announcement, the Clayton Fire and Police Departments worked closely with IRT to create plans and detailed maps for demonstrations, spontaneous protests and various contingency plans within Rhodium®.

Multiple incident action plans (IAPs) were prepared within Rhodium® and were first used in table-top exercises prior to the grand jury announcement. With the IAPs and robust mapping features in Rhodium®, the system allowed multiple agencies to visualize contingencies by location and incident type during the planning the phase.

The IAPs and contingency plans for the first two operational periods were pre-planned, and once activated, crews were able to roll these plans into subsequent operational periods creating simplified, effective and efficient work flows in the following days.

“These are first class IAPs,” said Chief Mark Thorp with the Missouri Region C Incident Support Team. “These went out to the EOC, and a lot of guys at the EOC are on Type 2 and Type 3 teams, and they’re recognizing these high quality IAPs.”

Once the grand jury announcement was made at the justice center, incident commanders with Clayton Fire and Police Departments had the ability to activate the IAPs and comprehensively manage emergency response within the City of Clayton and its surrounding communities. Rhodium® provided the commanders with the ability to coordinate movements, assignments, locations and actions taken by responders through the region, to include events happening in Ferguson, eight miles away.

Clayton Fire utilized Rhodium® in three command staff briefings each day to display current resource status, and plan future operations. The use of Rhodium® contributed to a well-organized response in Clayton and helped the city prevent any major incidents from developing.

Since the City of Clayton was a new customer and had not implemented Rhodium® into its operations yet, IRT provided a technical team for five days of on-site operations throughout the incident to help manage the Rhodium® system. The IRT team was able to assist the City of Clayton with Rhodium® prior to the incident, as well as during and after by training responders, coordinating general IT support for other systems and hardware, and actively developing custom functionality to meet the unique needs of this major event.

Incident Response Technologies, Inc., has been providing cloud-based solutions for public safety organizations since 2005. IRT's flagship product, the Rhodium Incident Management Suite, is currently in use throughout the United States and Canada by Police, Fire, EMS, Emergency Management, Campus Security, and other organizations. For more information on the Rhodium Incident Management Suite, visit IRT's website at www.irtsoftware.com or call (866) 260-7333.