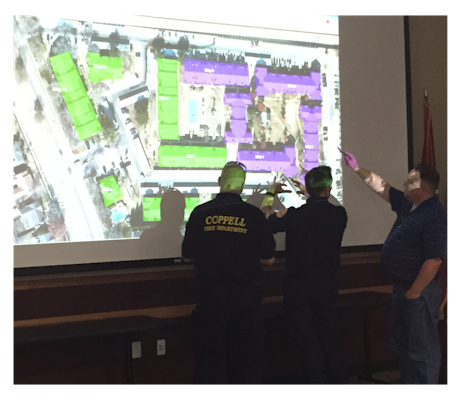 Houston, TX - An incident management tool produced by Incident Response Technologies, Inc. (IRT), was widely deployed in Texas in response to flooding events and Tropical Storm Bill. In recent weeks, dozens of people have been killed and thousands more impacted by multiple storms in Texas. Extended search efforts continue in an attempt to locate those still missing.

In Wimberley, a number of people were reported missing after heavy rain and flooding during Memorial Day weekend. Local responders deployed the Rhodium™ Incident Management Suite to create and publish Incident Action Plans and generate shared maps of the response and search effort. Rhodium was also used to coordinate the large volume of volunteers that were brought in during the search - a number that rose to more than 1,500 on some days.

The City of Coppell also experienced record flooding during the storms. In a six-day period, responders from the city's police and fire departments utilized their Rhodium account to produce Incident Action Plans and to map and track residences and buildings affected by the flooding.

"Rhodium was invaluable in providing situational awareness to developing conditions as we were affected by record flooding which ultimately affected 211 residences in the City of Coppell," said Brad Simpkins, a member of the City of Coppell Emergency Management office.

In Houston, the University of Texas System Police at Houston deployed Rhodium to manage its response to the storm. UT Police was well prepared to manage the storm response, having prepared a hurricane pre-plan in its Rhodium account many months ago.

As Tropical Storm Bill formed off the coast, the agency was able to activate its hurricane pre-plan in Rhodium, providing the basis for its response. Since the tropical storm required fewer resources than a large hurricane, UT Police was able to make minor adjustments to its pre-defined plan to meet the size and scope of the incident at hand. UT Police reported that its use of Rhodium saved significant time and effort, and also allowed responders to track their total hours expended during the storm.

Incident Response Technologies, Inc., has been providing cloud-based solutions for public safety organizations since 2005. IRT's flagship product, the Rhodium™ Incident Management Suite, is currently used by hundreds of organizations in more than 30 states and 3 countries to support Police, Fire, EMS, Emergency Management, Campus Security, and others.

For more information on the Rhodium Incident Management Suite, visit IRT's website at www.irtsoftware.com or call (866) 260-7333.